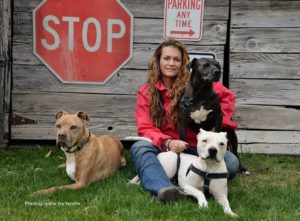 I began training dogs almost 20 years ago when I joined my town’s local Search and Rescue (SAR) group and became interested in training a search dog. I joined up with some other dog handlers who also had SAR dogs and began training with them. We used some of the “traditional” methods of dog training; choke chains (we called them training collars), electric collars, and used methods such as “choking off” and “alpha rolls.”

It wasn’t until my application was accepted by Best Friends Animal Sanctuary to adopt one of the dogs rescued from the Michael Vick dog fighting bust that I first heard the term “positive reinforcement” training. In order to foster and eventually adopt one of the “Vicktory Dogs”, the judge ordered that we work with a positive reinforcement trainer. I had no idea what that was so Best Friends found me a trainer named Skye Poitras, who I ultimately hired as a trainer for my Vicktory dog Halle. I worked with Skye for several years and learned all about clicker and reward-based training. She was not only my trainer but also became a good friend, and because of our mutual love for pit bulls we started a pit bull rescue organization in which we raised money for spay/neuter, a low- and no-cost training program, medical expenses, and promoted education about the breed and responsible ownership.

While Skye was helping with the training of Halle, I was amazed at the transformation she was making. I asked Skye if she could help me train my other pit bull, Tacoma, to become a therapy dog. It was through this process and my love of training that I decided to pursue dog training myself. I was so excited to see first-hand that dogs could actually learn without being forced, hurt, or intimidated into doing what I wanted. My dogs enjoyed training and were so eager to please through leadership rather than dominance. They also LOVED clicker training!

I started as an official positive reinforcement trainer at the beginning of 2013 and later started Three Little Pits Pawsitive Dog Training, named after my three adorable pit bulls. Along with a few private clients, I began volunteering with two local rescue organizations, Friends of Animals and Paws For Life, and would work with dogs that had behavioral issues in order to get them to the point in which they could be adopted. I became acquainted with another pit bull advocate who would also become a close friend – Kate Callahan, executive director of Jasmine’s House, a Baltimore-based pit bull rescue organization. I began volunteering with Jasmine’s House and worked with Kate in organizing a shelter enrichment program and setting up a no-cost training program for low-income pit bull owners.

In January of 2014 I was deployed by the Humane Society of the United States to volunteer with the 367 dogs rescued from the second largest multi-state dog bust. Probably one of the most exhausting weeks I’ve ever experienced, both emotionally and physically. I learned a lot about dog behavior and was able to observe how each dog was evaluated. That experience gave me even more motivation to help dogs overcome fear-based behaviors so that they can remain in their homes rather than end up in shelters.

My pitbull Tacoma and I were members of Therapy Animals of Utah for four years. We started the Best Friends’ I Read to Animals program at our local library, so I love to work with people who are interested in training their dog to be a therapy dog.  I have also trained service dogs for autistic children and adults with disabilities.  Having worked previously in two busy vet clinics and an animal rescue, I have seen first-hand the importance of ensuring that your pet has the most positive experience possible. Early socialization and play with other puppies are emphasized in my puppy classes and one-on-one training.

In my spare time, I enjoy hiking, snowshoeing, camping, reading, and spending time with friends and family. I also play several instruments and love getting together with friends for a good jam session. 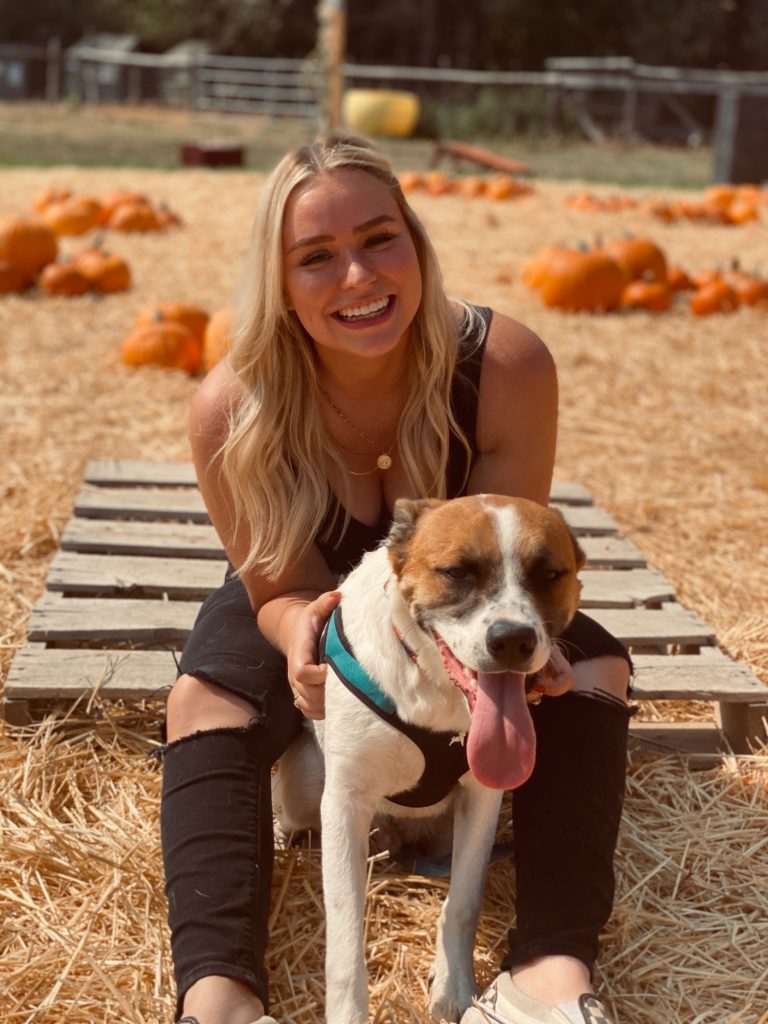 I began working with animals in 2015 when I first became involved in the nonprofit industry and sparked my passion for animal welfare.

I received my certification from Animal Behavior College in Dog Obedience Training with a specialty in shelter animals in 2018. While working towards my certification I worked with a local rescue, Companion Golden Retriever Rescue to learn science-based training methods, how the behavioral needs of animals in a shelter environment can be different than in a home, as well as working with private clients in their homes.

Prior to becoming a dog trainer, in 2016 I received my certification to be a Veterinary Assistant, also from Animal Behavior College. In 2019 I graduated from the University of Utah with a Bachelor’s degree in Political Science with an emphasis in Nonprofit Leadership and Community Involvement.

I have worked in various veterinary hospitals, vaccine clinics, rehab facilities and local animal rescue organizations. These experiences taught me the importance of early socialization, being able to understand canine body language, and how every animal may need something different in order to reach their training or behavior goals.

I believe that training should be about creating a bond with your pet and that is why I choose to train using positive reinforcement training methods. My goal with clients is to help them overcome any problem behaviors and reinforce the good behaviors by making training fun and something they can look forward to.

In my spare time I run a small business with my fiancé, and I volunteer at Wild Wonders, a local wildlife rescue. 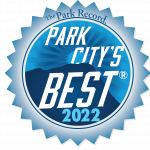